If you’re an outdoors enthusiast like me, it’s hard not to love a town like Durango, CO.  Hiking, camping, river sports, skiing in winter and an awesome old narrow gauge train that’ll ride you high above the Animas River, hang you over canyon ledges and give you some just spectacular views of the San Juan Mountains.  The train transports you back to the Old West as you chug up to Silverton behind the billowing black smoke of a classic steam engine running on a line established in 1882.

After all this activity, you’ve got some mighty fine options to quench your thirst. For a small town of less than 20,000 people, Durango boasts some heavy hitters of the beer world. One of its multi GABF medal winners is Steamworks Brewing. Without a wide distribution, this is somewhere you’ll have to visit to try it out.

Generous 5oz tasters for $1.67 each give you plenty to sample without dinging your wallet. My flight of six included their flagship and multiple medal winner Colorado Kölsch, multiple/2014 GABF medaler Backside Stout, a Belgian Pale, the “Ginger Ninja” Summer Lager, “Prescribed Burn” Chile Beer, and the “Conductor” Imperial IPA.

All good beers, but I was surprised that my favorite was the Chile Beer, a style in which I have not had much enjoyment. But this was a balanced and nuanced flavor, and didn’t just set my mouth on fire. Habaneros gave it a little heat, but it was mellowed out by the quintessentially Colorado inclusion of green chiles. I found it to be perfectly paired with Steamworks Chicken and Waffles (batter audaciously filled with green peppers). The beer played complimentary with that unique addition and the spices in the fried chix but contrasted sweetly against the maple syrup.

The Belgian Pale hits the right combo of hoppy farmy funk, is good but pales in comparison to some of the greats out there (I go to Hommel Bier by Perennial Ales).  Colorado Kölsch and Ginger Ninja are refreshing summer drinks, credits to their styles, but tame on my charts.

A great overall experience at Steamworks. Balcony patio is awesome in a town that boasts great weather. Good suds to compliment the great outdoors. 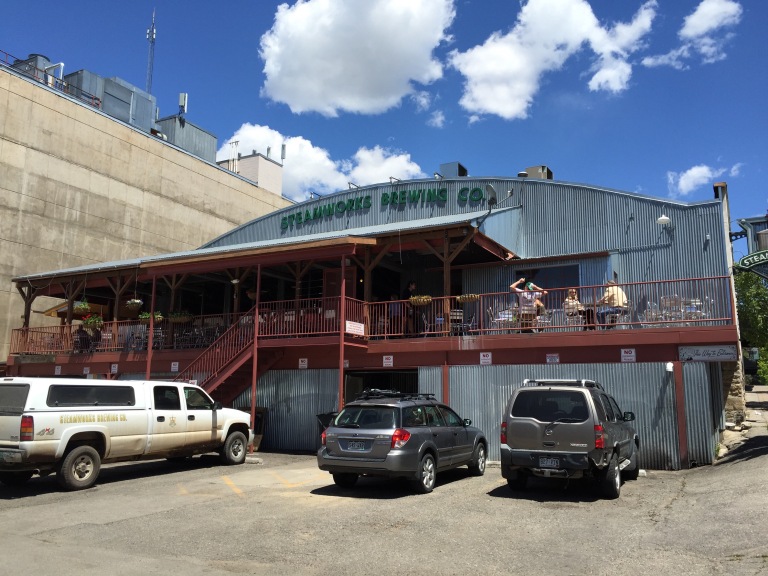