My inaugural adventure to the Grand-Daddy-of-Them-All every bit lived up to the hype. All alleged shortcomings seemed like quibbles. At the end of the day, you have unlimited access to some of the best beers in the country.

It certainly is overwhelming. Walking into the Colorado Convention, greated by the melodic squeals of a bagpiping troupe, it felt like we were marching into battle. Then crossing through the double doors into the Grand Hall, I paused, staring at the endless platoons of an unconquerable army of breweries. I then committed rookie error #1. Overexcited, my buddy and I jumped right into the first aisle and began tasting at will.

Your biggest challenge is finding a balance of getting to your favorites and trying out new ones. In hindsight, you need to take 5, hell take 10 mins, and make a gameplan. The free program lays out the daunting map of tables arranged by region.

As such, every segment of the country has a few highlights out of dozens of smaller acts trying to hit it big. Your favorites are likely everyone’s favorites, so you have to get to them early. THEY WILL RUN OUT. Crisscross the hall and tick those boxes. There will be plenty of time to try out the others. Don’t be scared by lines. At one ounce per pour, they will move fast. I missed out on some top notch beers because of it (Surly’s Barrel-Aged Darkness…3 Floyd’s packed up entirely midway through).

Had I been paying attention early on, I also would have noticed that many of the best breweries volunteered to be corralled to a special “Meet the Brewers” section of the hall. You can knock out that cluster of greatness early.

Still, despite my festival naïveté, I tried many ridonkulously good beers. Also got a sense of the current trends in the industry. The rise of the sour is upon us. Wicked Weed, Almanac, Rare Barrel and the Bruery’s new side brand Terreux have these on lock down. Outside the normal standards, many were highlighting Cherry Kriek. The bourbon-barrel imperial stout is still very popular (Cheers, Cigar City, your “Endless Nameless” blew my mind).

I was also introduced to some entirely new styles. A few places were pitching “Grodziskie”a traditional German smoked sour. It tastes exactly like you’d expect. Smokey. Sour. Gravity Brew Lab of Miami Beach pulled it off very well with their “Grodzilla.” Silver Medal winner for Experimental Beer, Short’s Brewing Co. made a fan of me with their gin and tonic beer “Melt My Mind.”

Note to brewers, you got to put some effort into making your table space stand out. There are so many non-descript plain white standard issue signboards that if you are a relative unknown nationally, you will blur into the background of this circus. You’ve spent all the money to get to Denver, spend a couple more bucks to make it worth your while. You want to be a part of the big time? Act like you belong there. This is basic marketing folks. Don’t understand? I’d be happy to be your consultant.

If you’re reading, this trip is surely on your bucket list. I can confirm for you that it is totally worth it. Come for a long weekend. Pick a session and then enjoy the booming beer town that is Denver and all the side events that are running concurrent to GABF.  Truly a celebration of that lovely libation we call Beer. 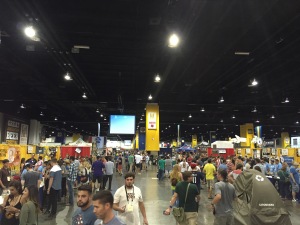